Taylormade, as a company, has never been shy about bringing new products to the market. In fact, one of the complaints that some golf consumers have regarding the TaylorMade brand is that they bring too many new clubs to the market in too short of a time period. Not long after their latest-and-greatest hits the market, another one is coming right behind it.

The good news for TaylorMade is that they seem to have a knack for producing one quality club after another, so golfers are willing to spend on the latest models because they tend to perform at a high level. Once a golfer decides to add TaylorMade clubs to their bag, they often become a TaylorMade player for life.

The most recent addition to the large TaylorMade line of drivers is the JetSpeed. There are a couple of features that make the JetSpeed unique and give it an edge in the market that many players are likely to want to try for themselves. The most notable design change is the ‘Speed Pocket 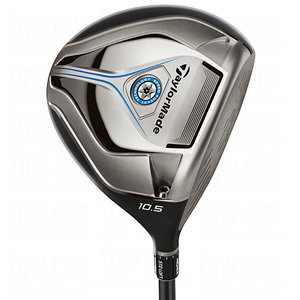 Technology’ that is found on the sole of the club. The idea behind this channel on the bottom of the club is to provide more forgiveness on balls that are miss-hit low on the face. Normally, a ball hit low on the face will not get a great deal of speed and will spin more than a well-struck shot. This pocket is designed to help reduce spin and allow the ball to travel further when it is hit low on the face.

In addition to the speed pocket, the JetSpeed driver also offers a 25 percent larger sweet spot as compared to the RBZ Stage 2 driver. The shape of the head is shallower and lower, which has moved the center of gravity forward and reduced spin rates. High spin rates rob the golfer of distance off the tee, so lower spin is almost always a good thing.

While there are some new aspects of the JetSpeed that set it apart from its predecessors, there are also some popular TaylorMade features carried over from previous models. Most notable among those are the matte black finish and variable hosel that can be adjusted up to 1.5* in either direction. The adjustable hosel allows for the golfer to customize the club to better fit their swing or the playing conditions for the day. The matte black finish on crown of the driver removes glare on bright sunny days and makes the driver pleasant to look at when addressing the ball.

Players who have enjoyed previous TaylorMade drivers are a good bet to appreciate the attributes that the JetSpeed brings to the table. Low-face hits are common off the tee among amateur golfers, so improving the results of those shots is a great way to add distance on less-than-perfect drives. With the traditional TaylorMade quality and durability that golfers have come to expect, the JetSpeed seems likely to become yet another highly-successful driver from this golf equipment leader.