Naturally, to win the U.S. Open in commanding fashion as Martin Kaymer did at Pinehurst, all of the club in the bag need to be working nicely. There is no way to win the national championship easily over the best players in the world without getting contributions from the driver through the putter. However, it was that putter specifically that helped Kaymer stay on track all week long and put his second major title in the books.

The lack of bogies that appeared on Kaymer’s card during the four rounds he played at Pinehurst were nothing short of amazing. In a field where 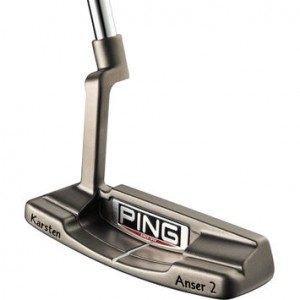 only three players managed to break par for the whole week, Kaymer kept his cards mostly clean by holing out beautiful par putts whenever he did get in trouble. His success should highlight the importance of putting for the average amateur golfer. Even if you hit a couple poor shots on a given hole, all can be forgiven with one great roll on the green.

The Club That He Trusted

In steamrolling his way to the U.S. Open title, Kaymer used the PING Karsten 1959 ANSER 2 putter. It is a classic looking putter that stands in contrast to many of the other flat sticks that could be seen in use around Pinehurst #2. The 1959 ANSER 2 is a traditional design with heel and toe weighting to help golfers achieve a true roll and a great feel putt after putt. There are no tricks or gimmicks involved in this club – it is simply a well-designed, solidly built putter that allows the player to let his or her true ability shine through.

One of the great attributes of this style of putter is the wonderful visual that it gives the golfer at address. It is easy to align this putter properly behind the ball thanks to a thin top line and bright white alignment line. It is hard to imagine that any golfer would object to the appearance of this putter as it sits behind the ball.

Where Does Kaymer Go From Here?

With two majors under his belt, not to mention a huge putt in the Ryder Cup, Martin Kaymer is certainly full of confidence and has the game to back it up. With two more majors to be played this season, and another Ryder Cup, it won’t be a surprise if we see him back at the top of the board sometime very soon. He also secured the Player’s Championship this season, so the big stage is clearly not something that causes him to shy away.

Likely, the success the Kaymer experiences will be closely tied to how well he continues to roll the ball on the greens. His swing is impressive and seems to hold up under the most intense pressure. As long as he continues to hit great putts with the PING Karsten 1959 ANSER 2 putter, there is no reason to believe Kaymer won’t continue to contend for major championships for many years to come.