The Puglielli Wedge has been designed by Mac Puglielli, an industry veteran and golf tour representative of Adams.  Thie wedge is designed for both amateur players who are becoming better in their games as well as for the tour professionals who need to maintain their game.

This wedge is an ideal for use in the Champions Tour, with 304 stainless steel and a a soft feel that is distinct in this wedge alone. It also boasts of a fly cut face, milled grooves, premium steel shaft, brushed satin finish and a distinctive grip and ferulle.

The Puglielli Wedge has been tested not only in the boardrooms but in the field as well with prototypes used in the Champions Tours for a year before the design was finalized and models reproduced.

So what drives up the forgiveness quotient in the Ovation Driver?  This is made possible primarily through a tungsten plug in the driver’s rear sole which is responsible for creating both a high MOI and a low gravity center.

The Ovation drive’s high launch will surely elicit admiration not only from mid and low but also high handicappers.  The Ovation Driver is available in two models, namely the standard and the offset.

The drivers are counting on the Boxer Technology to help golfers achieve maximum speeds of their golf balls when hitting on center and even off center.

As proof of the proven performance of the Insight XRD Drivers by Adams, it will be the official driver of the golfing industry’s distance authority, the Long Distance Drivers of America effective 2008.  From then on, the Insight XTD Drivers will be used by the competent and powerful hands of the game’s famous strikers. 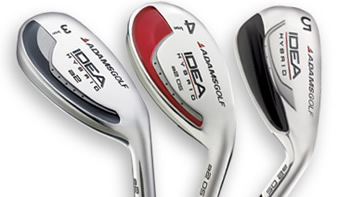 Adams has revolutionized the concept of clubs; the Idea Hybrid series will change your game for the better with every swing. By lowering the center of gravity 11%, and putting it 2.5 times deeper, these clubs have become the easiest set of irons ever to be swung.

Replace your conventional long iron, and your mid iron with A2 OS Hybrids, which combine the control and accuracy of an iron, with the distance of a fairway wood. Every hit will go exactly as far and as fast as you’d ever hoped.