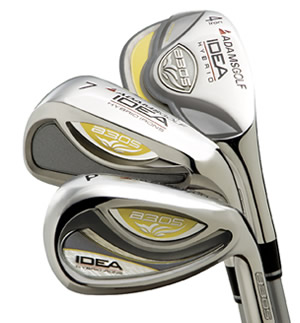 The Idea A3 OS Women’s Iron Hybrids is not only stylish but easy to hit as well. This is ideal for women golfers whether just starting out or already an expert golfer.

This hybrid iron will help you get that perfect shot that has been elusive all this time. That’s why this iron hybrid is called easy-to-hit Idea a3 OS.

It boasts of the Boxer Technology for maximum enjoyment. Buy a set and you get teh Boxer Hybrids 4,5 and 6 which are designed to give you the highest MOI for straighter shot and maximum forgiveness.

Hybrid Irons 7. 8 and 9 have a wide sole design which allows you more accurate swings by helping cut through variosu turf interferences.

The Lady SQ Sumo Squared Hybrid w/ Graphite Shaft is one of Nike’s best selling golf clubs for ladies. It is dubbed as Geometry’s marvel considering its ability to stand beside you and help you out in the most difficult situations in the course.

The Lady SQ Sumo was designed in such a way that it can accomplish outstanding stability at impact. This club is capable of the highest moment of inertia or MOI thanks to its generous offset, extensive perimeter and square head design. If you want to achieve high launching but soft landing shots then this is the hybrid for you.

This hybrid will allow you to get stable ball speeds consistently thanks to its design specifially the lightweight steel face which is thick in the middle and thin on the edges. You also get more forgiveness and maximum distance.

This club boasts of producing high moment of inertia and low center of gravity due to the square Nike PowerBow design. Thus, you get a very forgiving and stable head during impact.