The Adams Golf DiXX BLU Digital Instruction Putter can make golf easier as this is a computerized training system. You get to know a lot of things about your playing style including your swing path, face angle and impact position. This putter keeps track of and analyzes the three most important elements in a golfer’s swing namely the impact position, path and face angle.

The Adams Golf DiXX BLU Digital Instruction Putter comes with a playing module that has been approved by the USGA as well as a computer module that will help you use the putter efficiently. With this highly advanced putter, you can review your putting habits and correct them if there is a need to do so.

You can choose between the Standard Mode or Pro Mode, whichever your skill level is. After putting, the screen will display the words “NICE PUTT” if you met all the three elements or indicate which of the three was not followed efficiently. The Nike Unitized Tiempo Putter gives you a consistent performance on the course thanks to the stainless club head that’s been CNC milled and welded by laser to the shaft to form a single unit. And since there is no bond between the shaft and the head, you get better control of the distance. Traditional putters that are bonded produces vibration that’s beyond the normal sensitivity range.

This putter from Nike can transmit vibrations that echo your natural sensory systems so you get unparalleled feel. With the Nike Unitized Tiempo Putter you get better feedback and better play. With the Ping Karsten Craz-E Putter, you get the solid response coming from a steel-faced putter and yet experience brought about by an insert feel thanks to the cavity’s elastomer insert. This putter provides increased moment of inertia and maximum forgiveness.

The Ping Karsten Craz-E Putter boasts of a stainless-steel head and a design that aims to lessen vibration. The grey steel looks attractive with the alignment aids in blue. The putter is also easily customizable with length and lie and loft options.

This putter has great looks plus a great alignment providing maximum balance and stability. Mizuno has bragging rights to the Mizuno Bettinardi Black Carbon Putter not only because it was developed by  Bob Bettinardi, who is famous the world over as a putter creator, but because it has a lot of features that golfers will be salivating about.

This steel putter boasts of being ultra consistent having been milled a hundred percent from carbon. It has a solid and soft feel due to the patented Feel Impact Technology Face or FIT Face.

The FIT Face technology provides an enhanced feel everytime you putt. The area where the technology is applied makes sure the surface area in contact with the ball and the face is reduced so that you get a solid feel when putting.

The Mizuno Black Carbon Putter has a black chrome finish that is not only elegant but also lessens glare when you are on the greens. It also has temper steel shafts and Winn AVS Honeycomb Sun grips.

Bettinardi designed the putter with two thigns in mind and that is to give the golfer that confidence to putt and to get an enhanced feel for every stroke he makes.

The Dunlop Red NeckPutter is no doubt an attractive piece of golfing equipment to start with. It features a red anodized aluminum hosel making it look more attractive than it already is. But there is a reason for the hosel. Dunlop says most standard putters are heel-weighted and imbalanced (causing golfers to pull short putts) because of the hosel’s extra weight.  The Redneck’s ultra light weight hosel make sure that the weight is evenly distributed all throughout the putter.

In addition to the accurately centered sweet spot, Dunlop says the red anodized hosel also softens the impact of the stroke on the ball, resulting in better feel on both long and short putts.

This putter is made of 100% CNC Milled construction from 8620 soft carbon steel and is ideal for mid-handicappers who want not so pricey equipment.  It has a soft grip though but maybe that’s because it is really reasonably priced at $99.99. 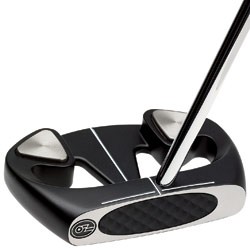 If you want the highest MOI,  twisting resistance in the OZ putter line and added stability then choose the Nike Black OZ T130 Mallet Putter.  It boasts of two 65-gram tungsten weights positioned in the clubhead’s extreme heel and toe, providing that much needed stability.  These features reduces skidding, provides stability and keeps the putts on the intended line.

This Putter has an aluminum body (that is so lightweight it is lighter than steel by 65%) and tungsten weight plugs which moves the weight away from the clubface, thus reducing putt skidding.

It also has a soft polymer insert  so you can expect that the ball is kept in contact with its face thus promoting a roll.  Polymer is 63% lighter than aluminum so it increases the stability of the clubhead.