The latest in the legendary ‘R’ lineup, the R15 brings all of the high-tech features and great looks that you would expect from a TaylorMade driver. The company that has been at the front of so many developments in the golf club industry over the years continues in that tradition with the R15. The changes in golf club technology in recent years are nothing short of incredible, and the R15 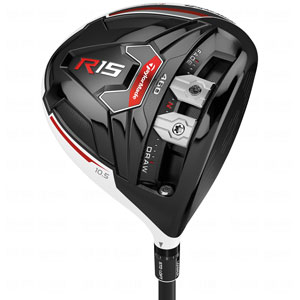 represents many of the best features that have been developed during that revolution.

Everything You Would Expect

While the R15 does bring one new, notable piece of technology to the table, there are also all of the features that modern golfers have come to take for granted. That includes the ability to swap shafts out with just a simple tool and a few clicks, a loft sleeve providing up to a four degree range, and a low center of gravity that will help you launch it high with low spin. If you are looking for a driver with all of the latest bells and whistles, look no farther.

TaylorMade is the company that made moveable weights popular within drivers when they first introduced the ability to swap weights around from heel to toe to chance the feel and performance of your clubs. Now, in the R15, they have a split-weight system on the bottom of the club which allows you to slide the two weights into different positions to find just the right combination for you. For example, a player who struggles with a hook could slide both weights out onto the toe in order to slow it down and hopefully prevent that hook. A player looking for more stability through impact could simply split the weights – one on the toe and one on the heel – to help steady the club through the hitting zone. This kind of customization is what TaylorMade has become known for, and it helps you to get the best possible performance from your driver.

Picking a new TaylorMade driver such as the R15 is among the safest bets you can make in golf. You will be going with one of the most-trusted names in the business, and with a company that has a specific reputation for turning out high-quality drivers that are trusted by some of the best players in the world. If you think the R15 might be the right choice for your bag, try one out at your local golf shop and see for yourself how it performs.