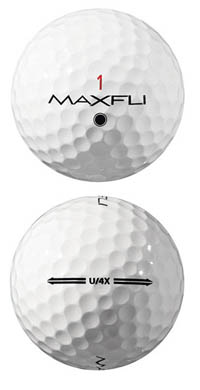 Let’s face it, when it comes to tour-performance golf balls, one of the last places we would think about getting them from is Maxfli.  No offense to them but their golf balls have mostly been geared to those who are mid-handicappers.  However, that may have changed with the new golf balls that Maxfli has rolled out recently.  They are called the U Series golf balls, and start from U/2 all the way up to U/4, with the latter one being the best that they have to offer.  Here is a description of the new U/4 golf ball:

“The right golf ball for you is the one that will help lower your score. The new U/4 and U/4x are engineered with 4 layers to lower scores through providing the perfect combination of distance, spin and feel. The U/4 provides increased short game spin, a softer feel and excellent distance. The U/4x spins less, has a slightly firmer feel and launches lower for longer overall distance. With the Maxfli U/4 and U/4x, we’ve got U covered for lower scores.”

Golf companies always seem to over-hype their products, so are these new golf balls worth getting or should one just stick to the Titleist/Taylormade/Callaway/Bridgestone balls that are known for giving great performance?  What follows is my overall review after having played a few rounds with them.

One of the things about the ball that first caught my attention came at the first hole that I played them on.  It was a short par 4 and after a good tee shot I had a wedge shot in.  I usually put a lot of spin on the ball with my wedges and get a decent amount of spin out of a Pro V1, but I was pleasantly surprised with the spin I got out of the Maxfli U/4 golf ball.  I watched the golf ball go past the hole and then spin back about 10 inches, and that’s when I knew that this ball was the real deal.  It wasn’t just wedge shots either.  I was able to get a good amount of spin with my irons as well, and even fairway wood shots landed softly on the green and didn’t roll out as much as I thought they would have.

When it came to the short game, I found the Maxfli U/4 to be very comparable with the Pro V1 when it came to chipping and putting.  The ball has a great feel to it when putting on the green and the ball itself features a helpful line on it to help line putts up.  The ball checked up when I wanted it to when chipping as well, which is surprising given that I usually was never able to get a Maxfli golf ball to do so in the past.

It is not really a huge negative or anything, but I found that I got less distance with both the driver and the irons with these golf balls as opposed to ones in a similar price range such as the Pro V1 and Hex Tour.  Generally it was between 5-10 yards with the driver and just under five yards approximately with the irons.

Overall I was very surprised with how well the Maxfli U/4 golf ball played.  Both the spin and feel are great, with only a minor issue in regards to distance.  It is a golf ball that definitely puts the company back on the map as far as I’m concerned, and if you are one of those golfers who is looking for something new I would certainly recommend giving this ball a try.