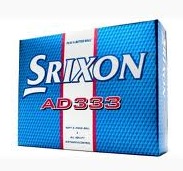 Srixon has slowly been climbing the golf ball rankings year after year with great quality golf balls that appeal to any handicap.  A close friend of mine gave me some Srixon AD 333 golf balls to try out, so I decided to compare them with Titleist NXT golf balls to see how they perform.

The Srixon AD 333 golf ball is a 2-piece ball made with a state of the art Rabalon elastomer cover.  It supposed has a softer feel and more durability than Surlyn, which is another popular cover used on golf balls.  It has a 333 aerodynamic dimple pattern, which is unique in that most golf balls these days have an even numbered dimple pattern.  With that said, how does it compare to the Titleist NXT?

As stated earlier, the golf ball does not have a lot of spin to it when approaching the green (at least during the few golf rounds that I played with it).  However, it still compared favorably to the Titleist NXT when it came to the short game (putting, chipping, low irons).  What surprised me the most concerning the short game using the Srixon AD 333 was bunker play.  I was hitting great bunker shots consistently with the Srixon golf ball, as opposed to sporadically using the Titleist golf ball.  I generally hit explosion-type bunker shots where the ball just lands on the green and runs to the flag, and the Srixon golf ball performed beautifully in this area.  Nonetheless, it was below average when it came to chipping around the green though.  If you need to hit a flop shot or have the golf ball stop immediately this is not the golf ball to do it effectively.  Another bright spot however came when putting, as the Srixon golf ball had a better and much softer feel than the Titleist golf ball.  It was much easier to gauge distances putting when using the Srixon AD 333.

My overall view of the Srixon AD 333 is that it compares well to the Titleist NXT golf ball, for both long game and short game.  The ball offers great distance off the tee, while having below average spin on incoming shots to the green.  It is a mid-handicappers ball at best, as it doesn’t offer the performance that a low handicapper needs around the greens.  It could be a great alternative consider if you  are playing a Titleist NXT or similar golf ball.

Take a look at some great deals on new and used Srixon AD 333 Golf Balls.