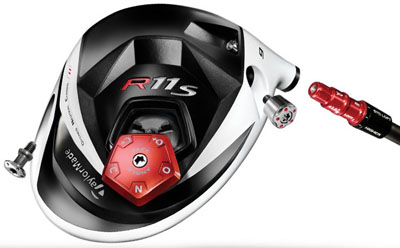 Taylor Made Golf has release details on their new driver, the R11S. The new R11S is larger, quicker, more adjustable and longer than the original R11 driver. The 460cc white finished head is powered by a new 5-sided ASP plate, new 1.5º FCT sleeve and movable weights. With 3D Tuning, you can independently tune loft, face angle and flight path your swing.

• Tune loft up or down by 1.5° with Flight Control Technology (FCT)
• Tune the face to one of five angles (±3°) with Adjustable Sole Plate (ASP) Technology
• Tune the center of gravity toward the heel or toe with Movable Weight Technology (MWT)
• 460cc titanium head with Thick-Thin Crown design for lower CG
• Inverted Cone Technology (ICT) promotes more ball speed on off-center hits
• White non-glare crown and black clubface for easy alignment