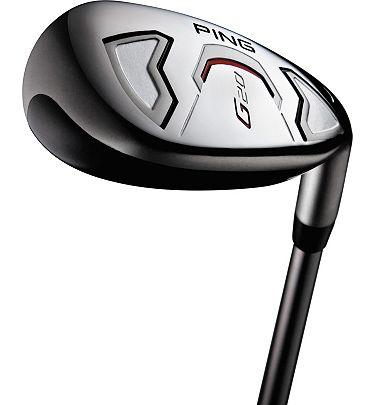 One brand that has really been climbing the ranks in my book over the past few years is Ping, especially with their hybrids.  They don’t have the same airtime as Callaway and Taylormade do, but don’t let that take away from the fact that they have some really solid golf clubs.  One of the clubs that I played a few rounds with was the Ping G20 Hybrid, and what follows is my honest review of it.

The Ping G20 Hybrid is one of the best hybrids out on the market today, period.  I don’t usually say that about many golf clubs, but this hybrid is the real deal when it comes to performance and feel.  If you have ever tried out the G15 hybrid, the updated G20 has some subtle differences to it that really enhances the club.  The most important difference in my view is that more bounce was added to the club to make it more consistent in any lie.

The main negative I had about the G15 model was that it wasn’t very good out of the rough as opposed to similar clubs on the market, but Ping has seemingly fixed this with the G20.  It doesn’t matter whether I am hitting it out of the rough, fairway bunker, hardpan, or whatever, I get the same great contact every time.  The golf ball just shoots off of the club.

Another difference is that the G20 has a higher launch angle, which is really great for those who need to hit a shot at a 3 iron distance but want it to land like a 9 iron.  Not only does it have a high launch angle, but low spin as well to help stop the ball on the green faster.  I usually play from the blue tees at local golf courses, and many of the par 3’s in the area require a shot of about 200 yards or so to reach the green.  With the Ping G20, instead of having to pull out a 3 iron and try to run it up as close to the flagstick as I can, I can instead go right at it knowing that the ball will land softly.  The increased confidence that it gives on longer par 3’s is fantastic to say the least.

Lastly, another great positive I found in regards to the Ping G20 was around the greens.  For those of you who like to be more creative when playing rounds of golf, the G20 provides a great option for a ball that is up against the second and third cuts of rough, and also where there is a lot of green to work with.   There was a par 5 where I hit a good second shot that landed about 15 yards in front of the green, and with the pin all the way it the back it is usually difficult for me to get it all the way back there with a wedge.  Instead, I used a chipping motion with the Ping G20 and it rolled smoothly across the green about six feet from the cup.  The G20 not only offers great performance from the fairway, but also around the green if you are willing to give it a try.

The only real negative that I found when it came to the Ping G20 hybrid was that it had a tendency to draw from a normal lie.  I normally play a fade so it was beneficial to my game, but for those who already draw the golf ball it may turn into a hook using this club.

Overall I would give the Ping G20 Hybrid 4 ½ stars out of five.  The performance is great out of practically any lie you could imagine, and the high launch angle allows one to land the ball softly on the green and not have to worry about it rolling off.  I would especially recommend it to those who may be struggling a bit with the long irons and are looking to change it up a bit.

Take a look at some great deals on new and used Ping G20 Hybrid Golf Clubs.