One of the newest additions to the PING lineup, the Ketsch series of putters are designed to be more well-suited to your own personal putting stroke, while still delivering the quality feel that players expect from PING products. The Ketsch is a mallet-style putter with a low profile grooved face. Thanks to some unique design elements, this is a mallet putter that should be considered even by players who have traditionally only used blade-style models. Of course, PING is one of the original names in the putter-making business, so they have a long history of success at even the highest levels of golf.

As more and more golf club manufacturers try to tailor their products to the specific needs of individual golfers, the Ketsch follows along in that pattern. There are three models available in this putter, each with a different amount of ‘arc’ built in. The arc refers to how much you arc the putter during your stroke, from straight back to a more-rounded motion. 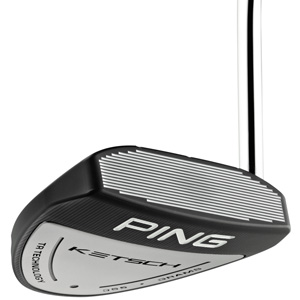 The options when ordering the Ketsch are ‘Straight’, ‘Slight Arc’, and ‘Strong Arc’.

This is an exciting development for some golfers because mallet putters have usually been designed with the ‘Straight’ putting stroke in mind. Most golfers who arc their putting stroke have had a difficult time using mallet putters in the past, so they have been stuck with only using blade putters. If you are a golfer with an arc in your putting stroke and have always wanted to try a mallet, this one would be a good place to start.

In addition to having the ‘arc’ choices when you select your Ketsch putter, there are also the standard options that you would expect to find with any putter purchase. The Ketsch is offered in both right and left-handed models, as well as an assortment of lengths ranging from 33 inches on up to 36 inches. By selecting the right arc and length for your game, you should have a putter that feels fairly natural right out of the box and takes very little time to adjust to.

Another interesting feature on the Ketsch putter in the variable depth grooves that are seen across the face. The idea behind these grooves is that by varying the depth, the putter is able to deliver a more-consistent speed to the roll of the ball, regardless of where along the face the ball is struck. A common problem among amateur golfers is hitting putts either on the heel or the toe of the club, causing the putt to lack speed and come up short. While it is still ideal to hit the center of the putter face, the grooves on the Ketsch can help to minimize the effect of your miss-hit.

Putters are a very personal choice, so trying one out is always a great idea. There are a lot of good elements to the Ketsch series, so it is worth your time to take a closer look and decide if one would be a good addition to your bag.