Keep Your Technology Running with the Gimme Charge

Technology has changed the world, and that includes the golf course. Today, nearly every golfer has some piece of modern technology with them when they are out on the course – from cell phones to GPS units and much more. If you are a golfer that likes to use your modern technology while you are playing golf, you probably have run into the problem of your devices running out of power during the round. If you are going to invest in a GPS unit to help you get the right yardages, for example, you want to make sure that it has power all round long. With the Gimme Charge phone charger for electric golf carts, you can charge up while you play. 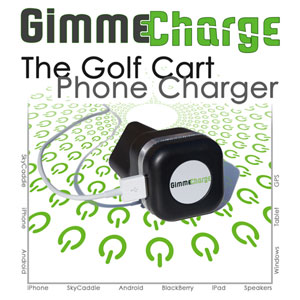 For golfers who like to ride in carts when they play, the Gimme Charge is a perfect addition to your bag – as long as you are riding in an electric cart. Many golfers have started to use GPS apps on their phones that are designed for golf instead of buying a separate unit that is only dedicated to the golf course. This is a good option, however running those apps can drain your battery quickly. If you want to make sure your phone can make it through the whole round without running out of juice, having the Gimme Charge available to you is a great advantage. As long as your phone charges through a USB cable, and the cart you are riding is electric and compatible with the Gimme Charge, you will be good to go.

Another good element of this product is the fact that it won’t drain off your batteries in the golf cart itself. Since the amount of battery drawn by the phone is so small in comparison to what the golf cart has to offer, you won’t notice any significant change in the power levels of the cart just because you are using the phone charge while you play. Hopefully, you can just plug your phone in for a couple holes during the middle of the round to top off your power level, and then take the charger out and get back to the business of playing your round.

As the years go by, it is likely that technology will play a bigger and bigger role on the golf course. No matter what kind of technology you choose to use in your game, you will need to keep it charged up throughout the day on the course.  If you find that you play most of your rounds in an electric golf cart, consider picking up the Gimme Charge to help you make it through even a long day on the course with plenty of power to spare.

Get Comfortable with the FootJoy ProDry Performance Base Layer

Most golfers like to look good when they head to the course. Even if you aren’t one who likes to spend a lot of money on your golf clothes, you probably at least make the effort to wear a nice golf shirt and some slacks or golf shorts. While dress codes are rarely in place at most courses today, the traditions of golf live on and many golfers take pride in how they dress before a round. While plenty of time is spent finding the right shirts and pants for a golf wardrobe, less time is spent considering other layers – and this could be a mistake.

Pay Attention to Your Undershirts

While it is true that an undergarment such as a long sleeve undershirt won’t be seen nearly as much as your regular golf shirt, it is probably even more important to your comfort and performance on the course. If you are cold during the round, you will have a hard 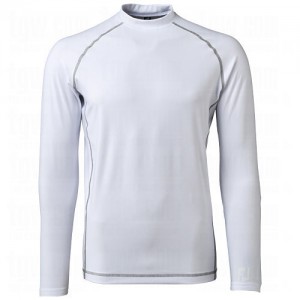 time having good feel on your shots and your score can easily suffer. At the same time, if the clothes that are keeping you warm get in the way of your swing, your game can suffer even worse because you will be uncomfortable and unable to make a free swing.

These problems are exactly why the FootJoy ProDry Performance Base Layer is such an important piece of clothing in a golf wardrobe. You want to have access to an undershirt that can keep you warm without getting in the way of your swing or feeling too ‘bulky’ as you go about your round. This base layer shirt is intended to be close fitting to your body so that it doesn’t catch during your swing. You can put on a normal short sleeved golf shirt overtop of this base layer and be set for a comfortable round in many different weather conditions. Just because the summer temperatures have gone away doesn’t mean you have to put the clubs up for the next few months – as long as you have the right clothes to keep your warm and still playing your best.

Of course, with the FootJoy name attached to this comfortable shirt, you will know that you are getting good quality and a product that should last for many rounds to come. FootJoy is a name in the golf business that has been respected and trusted for years, and for good reason. Many people, once they own one pair of FootJoy shoes, become loyal to the brand throughout their golfing life. Give this Performance Base Layer shirt a try and you just might be more excited about the next round of golf you get to play in colder weather.

Show Your Team Some Love with MLB Utility Club Covers

As the calendar makes its way into October, many sports fans across the country turn their attention to the baseball playoffs. Even if you are a die-hard baseball fan, however, you will still be looking for any opportunity you can find to get out on the golf course a few more times before winter sets in and the clubs get put away – or at least don’t get used quite as much. With these MLB Shaft Gripper Utility Headcovers, you can represent your favorite baseball team while out on the course with your friends.

The New Wave of Utility

There hasn’t been a golf club in recent memory that has changed the game quite like the utility club. Where most golfers used to carry just one or two fairway metals in addition to their driver, and then the rest of the set made up of irons and a putter, now most golfers have at least one utility club in the bag – if not more. Utility clubs are given a variety of names by different manufacturers, but they are all meant to do the same thing. They have the weighting and club head size to get the ball up into the air easier than an iron, but they have a thinner profile than a fairway metal to cut through the grass and provide a more-versatile experience. If you haven’t yet added a utility or hybrid club to your bag, make sure to stop by your local golf shop and try one out for yourself – you might not know what you are missing out on.

When you do purchase a utility club, it will probably come with a headcover of some kind. However, that doesn’t mean that you can’t purchase a new headcover to display your favorite MLB team. Additionally, you can gain some benefits from using an after-market headcover instead of the one that is included by the manufacturer. Often those original headcovers can be awkward and difficult to use, which is the last thing you want to have to fiddle with while you are trying to play good golf. These MLB Shaft Gripper Utility Headcovers are easy to remove from the club with just one hand, and will stay securely in place when the club is not being used. Of course, if your favorite team happens to have an exciting October and advance deep into the playoffs, your new headcover will give you a piece of bragging rights over your buddies.

Utility clubs are one of the best options for amateur golfers who want to hit higher and longer shots from the fairway and are unable to make that happen with their long irons. If you have one or two utility clubs in the bag, consider these fun headcovers as a way to support your favorite team, and protect your club at the same time.

While the United States team obviously had a disappointing appearance in the Ryder Cup recently, there were a few bright spots that stood out during the loss to the European team. One of those bright spots was the play of young Patrick Reed, who is quickly making a name for himself on the pro tour. Not one to back down from pressure or the spotlight, Reed is a confident player and appeared to love the pressure that the Ryder Cup brings. If the U.S. is going to be able to take back the Ryder Cup from the European team in 2016, it will likely need more players with the attitude and confidence of Reed.

Paired with Jordan Spieth during the team portion of the competition, Reed and Spieth were one of the few pairings that Captain Tom Watson could rely on to push the European players. Although he is not a big man, Reed manages to generate impressive power in his swing along with a well-rounded set of skills around the course. Already the owner of one World Golf Championship title in his young career, it seems to be a good bet that Reed will be a fixture for the U.S. team in the Ryder Cup for many years to come.

When Reed reached for the driver this season on Tour, he was grabbing a Callaway Big Bertha V driver – the latest in the classic Big Bertha line. While it is fitted with many of the newest technologies in club building, the V series driver still maintains the classic Big Bertha shape and look that so many golfers have loved through the years. It provides a more-forgiving face that allows shots hit off the sweet spot to still achieve good distance – something that pros like Reed and amateurs alike can benefit from. The hosel is adjustable in order to allow the player to customize just the ball flight and shot shape that they are looking for. While this driver might not suddenly turn you into Patrick Reed off the tee, it is certainly worth your time to try one out for yourself and see what it can do for your game.

Fans of the United States Ryder Cup team would be wise to keep an eye on the career of Patrick Reed as the calendar turns closer and closer to the next playing of the matches in 2016. While Reed can’t win the cup all on his own, his name is one that the next captain will be keeping a close eye on to see how his results in 2015 and 2016 position him in terms of points for the next team selection. With Reed and perhaps more like him, maybe the U.S. will be able to take the cup back after all.