Alignment is the most significant part of good putter that all too many players overlook. Most golfers get obsessed with their putting stroke mechanics and forget to make sure they are properly aligned with their target. On a flat putt, lining up the putter face with the center of the hole is the goal – on a breaking putt, the goal is to make sure your aim matches up with the line that you have chosen. The problem with working on alignment is that it can be difficult to judge how you are doing, so it is often easier to revert to working on mechanics and technique. Through the years, many putters have 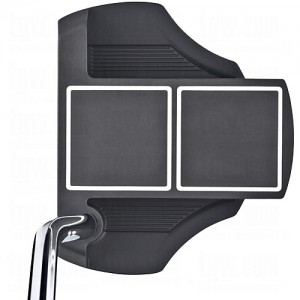 attempted to make it easier to properly align for your putts – and the Cleveland Smart Square Putter is another in that category.

Square Instead of Circle

One of the most successful putters of all time – the Odyssey Two-Ball – is a mallet putter that built its popularity on the idea of helping golfers line up their putts more accurately. It features two circles on the top of the putter head that are intended to be lined up with the ball as it rests on the green. In the same vein, the Cleveland Smart Square Putter gives the player two squares that are meant to line up with the ball. Is it easier to line up your putt with squares as opposed to circles? That is for you to decide. Both methods can certainly work – it is up to the individual golfer to decide which look and style they best.

Benefits of a Mallet Putter Head

Along with the alignment aid that this putter provides, it also offers the qualities that have made mallet putters so popular. Most mallet putters have heavier heads than their blade counterparts, giving the golfer a better feel for the swing as it goes back and through the ball. Mallet putters also resist rotation during the stroke, promoting a straighter path – one that some golfers feel is more repeatable and more reliable under pressure. Not all golfers like the feel and look of a mallet putter – but those who do are likely to appreciate what this Cleveland model brings to the table.

Whether the shaft of the putter goes into the center or heel of the putter actually makes a significant difference in how the club plays. Center shafted putters are mainly geared toward players who want to make a ‘straight line’ putting stroke – such as those who putt cross-handed. A heel shafted mallet putter kind of walks the line between the two styles. It allows a player to swing the putter on more of an arc, but still gain the stability that a large mallet headed putter offers.

Is the two-square alignment method right for you? That is something you will have to decide for yourself. If you feel like you are struggling with your alignment on the putting green, consider giving this square design style a try.