The Under Armour brand is one that has been growing in the golf world in recent years, but one single decision that they made may have set the course for even bigger growth in years to come – the signing of Jordan Spieth. The newly-crowned Masters champion would appear to be the 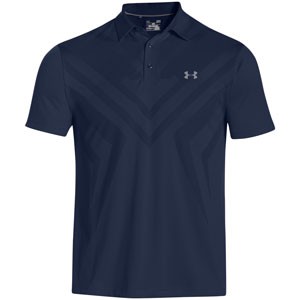 new face of American golf, and Under Armour has him under contract for years to come.

Of course, having all of the exposure in the world won’t do any good if the products that they are selling are low quality or undesirable. However, that isn’t the case. The Under Armour Men’s Armourvent Tips Polo is a great example of the stylish golf gear that UA has made available on the market. This shirt manages to bring together the modern styling of the Under Armour brand while remaining traditional enough to appeal to a wide range of golfers. The shirt is available in a number of different colors and includes a subtle design across the chest.

Performance is one of the main calling cards of the Under Armour line, and the same can be said about this polo. The Armourvent is designed to keep you cool on those warm days out on the course, so it has mesh ventilation included in specific locations on the shirt. It is a 100% polyester shirt, and has an anti-odor technology included as well. As a golfer, you know just how hot it can get out on the course during a summer round that can take four hours or more to complete. Anything that can help you stay cool and dry should be considered a benefit to your game, and this shirt can help toward both of those goals.

A Growing Line of Products

While you don’t have to wear the Under Armour logo from head to toe like Jordan Spieth, you still might be interested in exploring some of the other gear that they have produced for golfers. Shoes, pants, hats, and more are all offered by this company which has suddenly burst onto the scene in the golf world. If you find that you like some of the products offered by UA, there is a good chance you will enjoy others in their line. After all, if they are good enough to win the Green Jacket in such impressive fashion, they are likely good enough to help you play your best.