TaylorMade is no stranger to making exciting new drivers. In fact, TaylorMade typically takes more new drivers to market than any company in the game, and most of them are wildly successful. You will find plenty of TaylorMade clubs in the bags of the best players in the world, but it is their drivers specifically that usually capture the attention of the golfing public. With a variety of styles and designs to choose from, most golfers can find one club in the TaylorMade line that they love to hit. 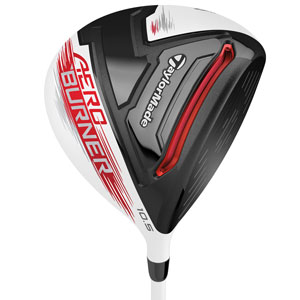 The AeroBurner driver is another in the long line of quality TaylorMade drivers. This one is a little bit unique by todays standards in that it doesn’t offer moveable weights or some of the other trendy functions that many of the new drivers feature. However, that doesn’t mean that it is light on technology. The ‘aero’ in AeroBurner refers the improved aerodynamic shape that TaylorMade has used for this club head. Despite still being a 460cc head, TaylorMade has tried to allow this club to cut through the air easier on the way down to the ball.

Some of the changes that have been made on this club include a raised center crown designed to reduce drag, and a fin behind the hosel which is meant for the same purpose. Also, underneath the club is a ‘Speed Pocket’ which will help to increase the size of the sweet spot as well as lower the overall spin rate of the ball coming off the club. All of these innovations sound great on paper, but you will need to get out and hit the club for yourself to really see what it can do. Every golfer has their own unique swing, and only trial and error will tell you how a particular club will perform when put to the test.

Many golfers think of hitting the ball a long way as being an act of power, but it is really an act of speed. It is speed which sends the ball flying hundreds of yards down the fairway, not raw power. You can’t muscle the golf ball off the tee and expect to hit it three hundred yards – you need to make a fast golf swing which tears through the ball at impact. As long as your swing is fast at the bottom, nothing else really matters. Speed through impact will equal great distance time after time.

If your goal is to add speed to your golf swing, the AeroBurner driver just might be something worth trying out for yourself. Despite not featuring some of the new bells and whistles of other drivers, this club has been engineered with the goal of helping you swing the club faster into the back of the ball. A test drive at your local golf shop should be all it takes to find out if this club is able to deliver on that promise.